Friends should not deceive each other: Erdogan to US 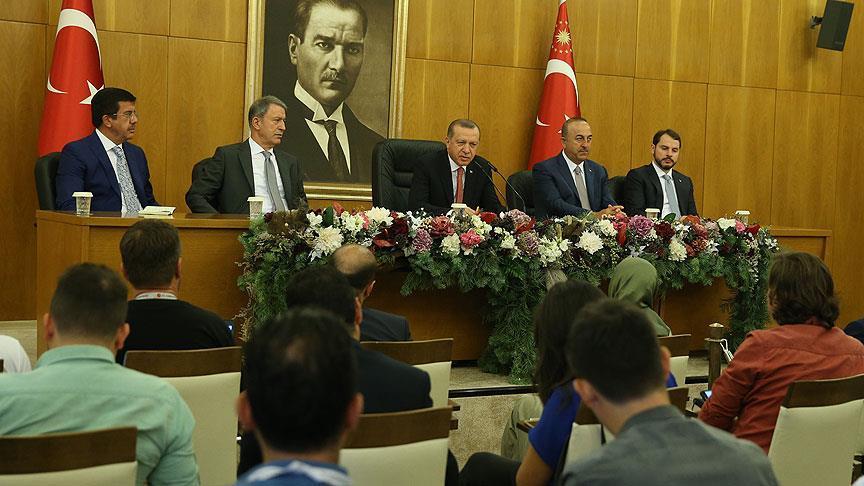 Turkey’s president said Sunday that friends should not deceive each other, referring to recent remarks by a US general over the terrorist PKK/PYD “rebranding” itself as the Syrian Democratic Forces (SDF).

“We know very well who’s who. Both are the same,” Erdogan told a press conference at Istanbul’s Ataturk Airport before starting a two-day Gulf tour in Saudi Arabia.

“What really matters isn’t changing the name plate, but what is inside,” he added.

Saying that Turkey gives no credit to the terrorist PKK/PYD changing its name to the Syrian Democratic Forces, he said, “Friends don’t deceive each other,” referring to the U.S.

Last Friday, speaking at a security forum in Colorado, Gen. Raymond Thomas, the head of the U.S. Army’s Special Forces, said that the PKK/PYD had rebranded itself the Syrian Democratic Forces to give it a voice in Syria talks and to assuage Ankara.

The U.S. has supported the PKK/PYD along with several other Arab militia groups under the umbrella of the SDF, long vexing Ankara.

The U.S. views the SDF as a “reliable partner” in its fight against Daesh and continues to provide it with arms and equipment against strong objections by Turkey, which views the PKK/PYD as the Syrian offshoot of the PKK terror group.

The PKK has waged a terror campaign against Turkey for more than 30 years that has led to the deaths of more than 40,000 people. It is a designated terror group in Turkey, the U.S., and EU.