Rally held in Istanbul in solidarity with Palestinians 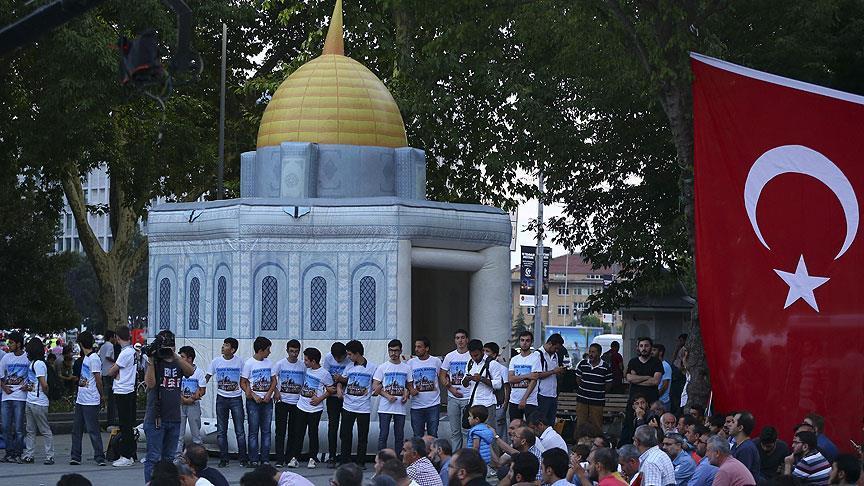 A rally was held in Istanbul on Friday to show solidarity with Palestinians in their struggle against Israeli restrictions on Al-Aqsa Mosque.

Speaking at the rally, Ramazan Kayan from Anatolia Students’ Union said al-Quds is a source of pride and honor for Turkey, and the “people in Turkey share the grief and pain of Palestinian people”.

Anger has spilled across the West Bank since Israel shut East Jerusalem’s Al-Aqsa Mosque following a deadly shootout July 14. The site is venerated by Muslims and Jews, who call it the Temple Mount.

The mosque was reopened after two days, with Israel installing metal detectors and cameras at its gates.

Israel had refused to remove the detectors, claiming the security measures were similar to procedures taken at other holy sites around the world.

All gates of Al-Aqsa Mosque will now be open to Muslim worshippers, without any age restrictions on them, mosque authorities announced Friday evening.

The announcement comes after Israeli authorities had shut the mosque compound to worshippers aged under 50 earlier in the day.

Jerusalem is sacred Muslims, Jews and Christians — and the Al-Aqsa Mosque is the Islamic world’s third holiest site behind the cities of Mecca and Medina.