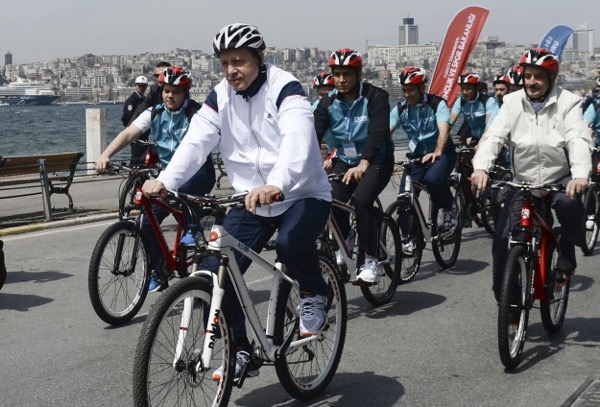 Erdogan made the remarks after cycling himself at a promotional event “the 51st Presidential Cycling Tour of Turkey” in Istanbul Saturday.

He said that unlike Turkey, people in many countries cherish bike riding. “Unlike many other countries in the world, especially Western countries, we could not endear bicycles yet,” the president said.

Erdogan acknowledged that Turkey’s infrastructure for bicycle riders was at the moment not enough, but he said that Turkish provinces like Konya had taken good steps for establishing such infrastructure in recent times.

He hoped that other provinces such as Istanbul, Ankara and Izmir too would get such infrastructure soon.

He highlighted the positive effects of riding a bicycle on one’s health and said that if prices of bicycles came down, more people would ride it.

“If producers make the prices affordable, then its consumption would be much more different,” he said.

The 51st Presidential Cycling Tour of Turkey will start in Alanya on April 26 and end in Istanbul on May 3.