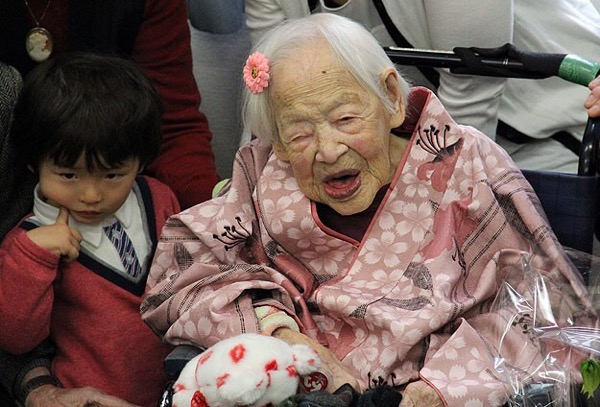 She was born to a Japanese kimono shop owner in 1898, and went on to outlive Canakkale, Hiroshima, the break up of the Soviet Union and the formation of modern Turkey.

On Wednesday, she died at the age of 117 in a nursing home in Osaka, her carers told the Kyodo news agency. Misao Okawa was the world’s oldest living person.

“Eating delicious things is a key to my longevity,” Okawa, who loved ramen noodles, beef stew, hashed beef and rice, has claimed.

She further attributed her longevity to at least eight hours sleep a night.

In Feb 2013, she was recognized by Guinness as the world’s oldest living woman, and assumed the mantle of oldest living person in June that year when fellow countryman Jiroemon Kimura died at the age of 116.

Tomohito Okada, the acting president of the nursing home, told Kyodo Wednesday that her death left him feeling “lonely as I have lived with her since her entry here in 1997.”

“I thank her for teaching various experiences to me,” he added.

Okawa was succeeded as Japan’s oldest person Wednesday by a 115-year-old woman, according to the Ministry of Health, Labor and Welfare.

According to recent data from the Turkish Statistical Institute, there are around 115,000 people in Turkey who are at least 90 years old.

An Anadolu agency story in 2009, however, refers to a woman living in a city in Turkey’s south-east who claims to be 125 years old, although lax ID card procedure makes this difficult to confirm.